Hi reader! There's a pdf available to download for free or by donation, but all the text in it is contained below.

This work is licensed under a Creative Commons Attribution 4.0 International License

When you make a reaction roll for a group of NPCs, roll a separate 1d6. This is the renown roll. If the roll is equal-or-below the party's tier, the NPCs know tales of the party's exploits. The tales might even be true!

At the referee's discretion, or alternately if the renown roll is a natural 1, the tale has changed in the telling. Roll or choose from the following table.

A character can spend a downtime turn to attempt to spread, distort, or quash stories being told about them. This could take any number of methods, as appropriate for the campaign setting, e.g.

Generally this requires the expenditure of gold, and an ability score check. Treat the following table as a very rough guideline.

A poor roll can usually be reattempted with another downtime turn.

Note that in this case, advantage and disadvantage are defined by the character's goals. For example, Rosamund uses her downtime to suppress rumours and gets a check result of 18. The next time the referee makes a Renown roll, they roll a 5 and a 1. Since Rosamund has advantage, the 5 is used. If Rosamund had instead spread news of her deeds, then advantage would mean the 1 is used. If Rosamund had rolled at least 20 when suppressing rumours, then no NPCs will know of her deeds, even if Rosamund's player later changes their mind and would prefer her name be known.

The results last as long as the referee sees fit. In a metropolis with frequent news turnover, the effect might last a year or less. In a remote village, people might talk of your deeds for decades. On the other hand, if you literally save the world, even a metropolis will remember you for a very long time.

Tiers are broad level ranges, defined in 5th edition of The Game Which Must Not Be Named as the following, with the explicit suggestion that the scope of a party's adventures should change with their tier.

If you don't know what a reaction roll is, then oh boy you're in for an excellent mechanic to houserule into your newer-edition game. Way better than this renown rubbish.

When the party encounters a monster, if the referee decides it's not obvious what their starting disposition would be, they can use a reaction roll to determine it. Note that clever roleplay, or intuiting the creature's goals and finding a way to accommodate them, can change that disposition.

The old-school approach is to not allow ability checks and insist on roleplay only. But even if you prefer letting players roll to persuade or deceive, a reaction roll is still a great way to set the stage and inject surprise. They make NPCs (even "monsters", or animals) feel more like characters with their own agency and goals, not just characters scripted to help the party or attack them on sight.

Here's a rough adaptation of the mechanic to 5th edition, that changes the roll to a d20 (traditionally it is made on 2d6):

When the party encounters a new NPC (or a group of them), roll 1d20 + the Charisma modifier of the PC who's drawing the most attention to themselves.

Other referees prefer to use the Cha modifier of whoever first tries talking to the monster, and still others prefer no modifier at all. In any case, it's not recommended to allow characters to add their proficiency bonus to the roll.

Also note that renown roll is meant to add an extra dimension to the reaction roll, not add a modifier to it. For example, a reaction of "Unfriendly" is still "Unfriendly" if the NPCs know of the party's deeds. The reason for that unfriendliness is what changes.

For old-school games, particularly those with a level cap around 10, you might instead roll d20 equal-or-below the level of the highest party member. Yes this'll lower the odds of a 1st-level party being recognised from ~17% to 5%, but that's probably in keeping with the tone of such games.

A consequence of this change is that slow-levelling classes like Elf and Magic-User are secretive and hide their tracks, while the Thief and Cleric classes quickly gain infamy. Personally I think this is kinda neat, but you could instead define a Renown score derived from a character's XP total — e.g. whatever level they'd be if all their XP was in Fighter — instead of whatever their class level is. 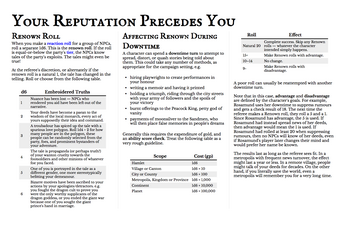